Where to Find Scholarships for Black Students

These scholarships for black students can offer awards of up to $40,000, along with mentorship and career opportunities.

TO AVOID TAKING OUT large loans, students can turn to college scholarships offered by private organizations or colleges themselves that do not need to be repaid. Many awards target specific students, such as scholarships for black students, which aim to support African American students and other historically underrepresented groups.

Black students and their families are among the groups that tend to borrow more student loans and therefore be more affected by debt. Nearly 85% of black bachelor’s degree recipients in 2016 borrowed federal loans to pay for college, according to data from the U.S. Department of Education. The amount borrowed is on average more than their white peers, and as a group black students default on student loans at a higher rate than other groups, according to various studies.

As more organizations and colleges have prioritized diversity in recent years, the availability of scholarships for black students has risen, providing additional opportunities for them to receive this valuable form of financial aid.

“For African American students, many are coming from homes that may not have the same financial support that the majority students are receiving,” Dawson says. “They may come from underrepresented educational systems and may not be able to compete as strongly for the academic scholarships issued through the universities and colleges.”

Nursing students in college may be asked to complete an application including essays, a transcript and recommendation letters to be considered for a scholarship through the NBNA.

These examples of scholarships for black students have awards that range from hundreds to tens of thousands of dollars: 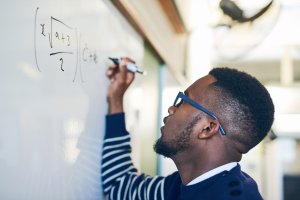 To take advantage of these scholarships, students must be resilient and persistent enough to seek them out when faced with a gap in financial aid, says Anthony E. Jones, associate vice president of enrollment management at Howard University in Washington, D.C.

“I’ve always been one to encourage students to seek out scholarship awards as if it were a part-time job,” Jones says.

He says he once enrolled a student who was “dubbed the million-dollar man, and that was because at the time of his graduation from high school, between scholarships that he had gotten directly from the institution and private scholarships, he garnered as much as a million dollars in scholarship aid. He would dedicate a set number of hours during the day to do his research, to write his essays, and it paid off.”

Even as more scholarships have become available, those that exist are often highly competitive and the award amounts may not be sufficient to adequately meet students’ needs. The Ron Brown Scholarship, which provides $10,000 annually across four years to talented and economically challenged African American high school seniors, receives as many as 10,000 applications, says Michael A. Mallory, executive director of the Ron Brown Scholar Program – and only 24 to 28 students are selected each year.

“There are scholarships out there, but people are assuming there are a lot more than there are,” Mallory says. “It’s hard for us to raise $2 million per year to do this program,” he adds, noting that many students rely primarily on institutional scholarships and financial aid.

In addition to seeking out private scholarships, experts say students should contact college departments and financial aid offices to learn more about scholarships for minority students.

The University of Iowa, for example, has a scholarship program to support historically underrepresented groups called the Advantage Iowa Award. The award amount ranges from $2,000 to $8,000 annually, depending on merit and financial need, for up to four years or until a student receives his or her bachelor’s degree, whichever comes first.

The benefits of these scholarships go beyond finances. Experts say earning a scholarship can also lead to internships, career opportunities and connections to a supportive network that last many years after graduation.

Trying to fund your education? Get tips and more in the U.S. News Paying for College center.